I was interested to see how my pacing at the Thames Path 100 compared with others. Did the average runner slow down more or less that I had? All these stats are purely based on the 2015 edition and every race is different... The race was fairly mild for the first 12 hours and then it rained for the last 16 hours. Generally firm under foot and could have been a lot muddier / hotter / colder / drier / more bacon sandwiches etc.

If you don't have time to go through the graphs, the headline stat is...

At Henley, the "par" is just over 10 hours. If you get here in about 11 hours, you are probably going to finish but have missed the 24 hour boat. 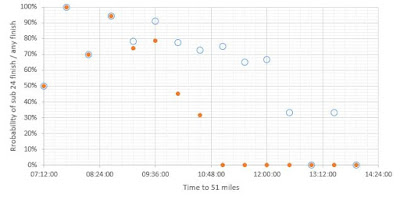 There is a lot of variation around finishing times but if you take 10 runner rolling average (the red line) you can see a trend. 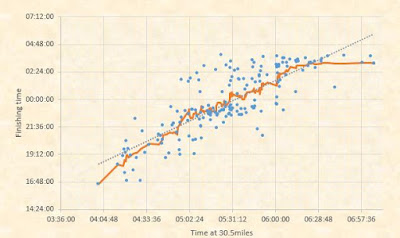 The other thing I looked at was how much do people slow down. A perfectly even pace would mean multiplying the 30.5 mile pace by 3.27 but the average is 4.3 times. The front of the field took 4.1 times their 30.5 mile time and the pack of the pack were more like 4.4-4.6x. The faster runner were also those that slowed down the least.

Where did people DNF (or refuse to continue)? The second half took the bulk of casualties with the 58 - 71 mile stretch getting the most action per mile. Mount Whitchurch is a brute. The hours of darkness take a lot of people. The last 9 miles had a similar rate to first section which I guess is down to the power of the finish line and also the sun was back up for most people. 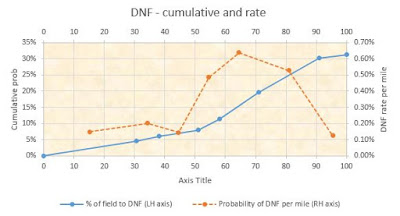 It is also worth looking at http://climbers.net/race/Thames-Path-100-2012 as they have some nifty stats for this and other Centurion races.