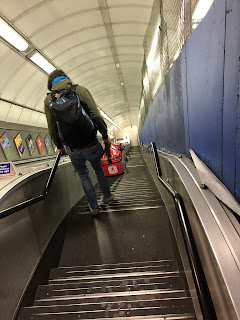 Overall, I was happy with my race. It reinforces my belief that starting steadily is the way to do things. I didn't go off particularly fast but those 5 minutes I gained over the first 2 hours probably cost me overall. In 2020, I started off steadily and slowed down less than most but this year, my slowing down rate was about the same as everyone else. My best section that year was Goring to Clifton Hampden. This year it was the first 10 miles : / (Pangbourne to Wallingford was second best section this year)
However you don't know what you are capable of unless you try and I starting off at sub 9 minute miles isn't for me just yet. I gave it a good for 15 hours before tapering back my expectations.
The staggered start was bad for me as I quite enjoyed overtaking people early on when I should have been more steady. Likewise I struggled to find people with similar pace to partner up with until the second half. Hopefully this was my last staggered start.
My aid station technique was excellent with only 38 minutes difference between Strava moving and elapsed times. In 2015, the gap was was 1hr 17 without the COVID protocols. Time lost in aid stations is very hard to recoup on the trail. I might even be able to get this down to below 30 minutes next time...
This was my third Top 40 placing - it was a few places off my 2020 performances but a lot better than my pre-COVID placings. I have hopefully improved from consistently ~23 hours finishes in the non-NDW races to more like 21 hours or below. Sub 21 in now my target rather than sub 24.

As always, thanks to James Elson, Nici, and the team for putting on a great race. Thanks to the amazing volunteers who made everything work in a COVID secure way, and to my fellow runners for keeping me company along the way.
Posted by The76thmile at 07:20