For short races such as a marathon or shorter, it is very easy to work out the pace. Typically it is just a case of dividing the target time by the number of miles and remembering these. The advent of GPS running watches such as Garmin and Suunto make this very straight forward and not really justifying a blog post. Some races have pacers to make it even easier.

Kipchoge's 2 hour attempt was a positive split by less than 30 seconds and elite runners are very close to even splits.

I have run several Centurion races including all 4 of the 100 mile events. I have looked out how people pace these events to get an idea of what sub 24 pace in like - such as A100 analysis , NDW100 ,  TP100 and the SDW100. There are detailed pace charts for each race based on past performance of runners (which isn't always a guide to the future...)

However when I compared all 4 races, they were remarkably similar. Basically the pace for the magic sub 24 hours is to get to 50 miles in 10 hours. They are quite different races but the trend seems to be there. 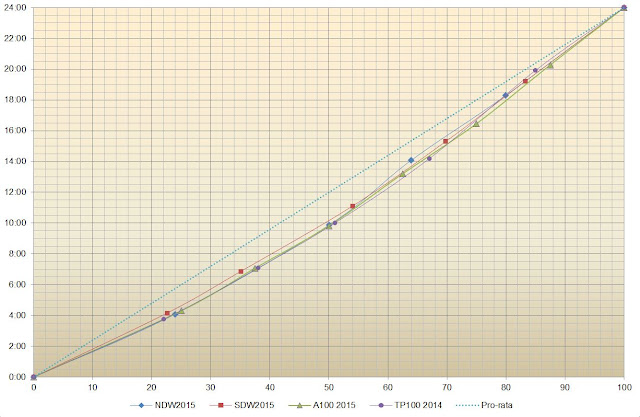 A friend of mine - ultrarunning legend Mark Thornberry (@Thorners125) recently finished the Javelina Jundred and had the 2.4 multiplier in the back of his mind. He said that he had mentioned it to some other runners and they thought it was nonsense. Naturally I went away and had a look.

Initially I was a bit confused as the pacing for Javelina is very even but it turns out the first lap is a bit shorter than the other 4. The race has a similar pace pattern compared with the Autumn 100 but the runners are slightly more even paced than the Centurion runners. I guess this is due to the desert heat slowing runners during the day so they can run relatively) quicker at night. The Autumn 100 has 13 hours of darkness with quite cold, windy, and exposed night sections so I would expect slow going at night.

I looked for another US race - the Western States has great stats but the massive mountain to climb at the start followed by a downward trend probably skews things. I then looked at the Rocky Racoon - 5 laps (pre Harvey) and in February so the perfect test case. It turns out the average pacing was almost identical to the Autumn 100. 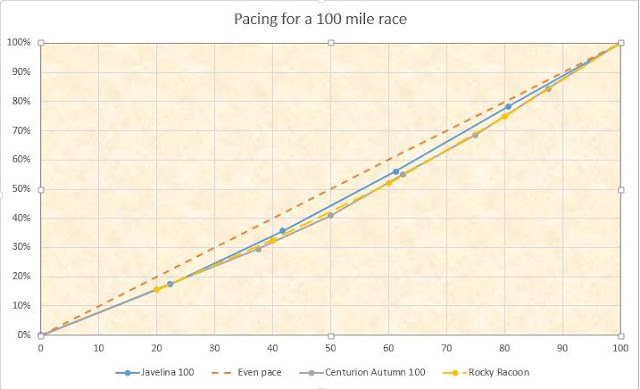