He is my race report from the Thames Path. It was my third sub 24 finish thanks to the wonderful organisation of Centurion and the fantastic volunteers. Most of you reading this will be familiar with Centurion running but for those who don't, they run a series of fully supported 4 100 mile races and 4 50 mile races around the South of England.

It was sunny, it snowed, it was sunny, it rained, the stars came out, there was a shooting star, I fell in a puddle, it was cold, the sun came up, the finish arrived. So long and thanks for the buckle - the volunteers were awesome too. 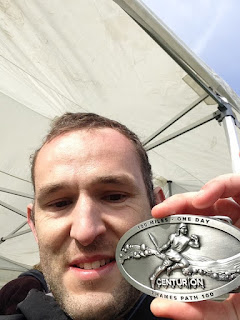 I'm a mid-pack runner (maybe 60th percentile would be more accurate) but if we did cut-offs for writing skills I wouldn't be getting a buckle (C at GCSE English was as good as it got). Hopefully I can share some of the things that went well and not so well. It is also much better to learn from someone else's mistakes so I am sharing some of mine.

I'm usually quite slow at getting my reports out but I thought I would try to get this one out early to remember the details. It will probably come out a bit like a 8 year old's stream of consciousness story of what they did in the summer holidays so you have been warned.

It was the usual slick Centurion registration process. I had been organised and did all my labels before leading home. Unfortunately I had written the wrong number on every single one of them so had to correct them all. Not the best start.

Next was drop bags and Sarah Sawyer who I had run most of leg 2 with on the A100 was on drop bag duties so nice to see another familiar face at the start. A quick briefing from Team GB's James Elson and we were on our

If you get one thing from this report, there is a bit in the first mile where the front runners go straight on through a little park and through a swing gate. If you are called Craig or Sam, this is a great route. However for people like me, you can avoid the bottleneck by taking the slightly longer route around the outside. You also get to laugh at the people jumping the spike topped fence to save a few seconds. Not worth a ripped pair of shorts (or worse) at this stage.

I started running with my running buddy Owen and his mate Chris the Physio. I was a bit slow leaving aid station 1 and they thought I would catch up. They would go onto finish together in an amazing 20:02. I ran a few miles with James who I had spent most of the second half of last year's race with. I also met Kate Jayden and Gabriel for a few miles of discussing the merits of a vegan lifestyle. I'm a long way from being vegan (or even veggie) but I've made an effort to get a lot more calories from plants this year. All in all a fairly social start to the race.

I had cramp in both quads just before the crew checkpoint at 28 miles. I added a High5 electolyte tab to my bottle and it went in a minute or so and luckily didn't return. I know a lot of people have their doubts about the benefits of additional electrolytes as food should have enough but the effect (placebo or otherwise) was enough to convince me. Fortunately I was free of cramp the rest of the day.

A few of the highlights of the first 30 miles were Hampton Court, Windsor Castle and a blizzard, A blizzard might be exaggerating but it was definitely snow flurries through Staines. Typical Centurion weather even in May.  I also bumped into a work colleague who had told me in the office that his mate was also running the Thames Path. In a weird coincidence, his mate was the guy I was talking to at the time. What were the odds? (actually about 1 in 294 given the number of starters)

I went through Dorney a couple of minutes down on last year but feeling pretty good. The Sawyers appeared again and helped me refuel and get on my way.

Hurley so arrived and I had my number taken by Graham Carter. Luckily there weren't any drinks for me to knock over this time.

There was a proper shower of rain and before long I got to Henley. I remembered that it was on the far side of Henley so didn't get into a big huff last time as I made my way past lots of pubs and pub goers.

Henley - half way by distance

Fellow Wednesday night headtorcher Louise Ayling was host at Henley. A couple of teas and some splendid spag bol fueled me for the second half. First 50 had been fast aid stations but this was the first proper break. A change of socks and top here and put the trail shoes on. I looked back as I was leaving and had left waterproof behind. Always check behind you when you leave an aid station!

Reading - half way by time and start of the 27 miles of proper night running. The crux of the race is the next 27 miles - get to 85 mile and the (metaphorical) boot of Dan Park out of the 85 mile point should be enough to get to the finish.

I had fallen into running with a fellow mid packer in Rich who as an added bonus had a gadget which told us how far to the next checkpoint. We whiled away the hours through this bit with me asking every 5 minutes if we were nearly there yet.

Whitchurch to Streatley is the fun roller coaster bit through the woods. I had joked about this being the Thames Path's Hillary step which is the key to making it to the finish (or Mount Everest). It is a comically step bit after 70 miles but was over quickly.

The next section was the land of the never ending field. I remember this from last year but this time it was a starry sky rather than torrential rain. The fields still went on for ever.

We had just a fireworks display on the horizon earlier when there was an extraterrestrial firework display. It looked a bit like white firework going sideways but it was a long way from were we had seen the others. I thought it was my mind playing tricks but other runners have mentioned it since.

I had been talking to Rich and about the name of my blog and that the 76th mile is roughly the mile which has the most DNFs. We were part way through the 76th mile when Rich was slipping round the edge of a puddle and he was uncomfortably holding a barbed wire fence to get round it. I went round the other side and promptly fell arse first into muddy puddle. At least it wasn't the Thames but I was covered in cold mud and it was pretty cold. Rich was an absolute gent and help me out of the puddle. He even waited until he was sure I was ok before laughing at me.

I always take a spare pair of shorts and I got changed at Wallingford into a new pair of shorts and an extra base layer. Having done the A100 and last year's TP100 in shorts I thought I didn't need waterproof trousers but this wasn't the smartest decision in hindsight. It was cold in shorts to say the least. I also managed to lose a shoe in the mud at one point so was a muddy mess arriving at this aid station. I am truly very sorry for the mud I left there - I should have cleaned up the mud but I would have struggled to bend down to pick up a tenner after 78 miles. It was also nice to see the heated chair of doom with a volunteer sat in it rather than a fresh DNFer. This is probably the most important aid station in the whole race and I have particular thanks to the guys and girls here.

Last year it was still dark when I finished this section so I knew I was quite a long way behind last year but seeing the sunrise out on the trail was amazing. There was a clear blue sky with a fog over the Thames and frost on the ground. It was absolutely stunning and I wish I had taken photos but it was so cold and I would have seized up if I had stopped to take photos. I will have to keep just my memories. It is a privilege as a 100 mile runner to see the sunrise after having travelled through the night. Whilst this year was a bit slower than last year, it was definitely more enjoyable than the rain and trench foot of 2015 .

The sun was up and thoughts were turning to getting things done. I had a quick chat with Dan Park about his GUCR race plans this year and compared notes on Grandslams. I am sure you will get the big buckle next year.

The last 15 miles or so were 4 hours of power walking as my hamstrings were unhappy. Last two aid stations were back to grab and go with tea and coke being the order of the day. Rich pulled away from me in the last couple of miles as he could actually run even if they were 12 minute miles.

It was lovely to see the blue Centurion arch again with the usual multitude of emotions. Louise was again being a great host with a finish line cup of tea. I got a hug from Nici and congratulated James on a great race and Team GB honours and before long it was time for a shower and taxi to the station. Next time I will remember a towel rather than using a base layer...

See you in Winchester for the second installment of the Centurion Grandslam....

I am very happy to have finished with another sub 24 buckle. I had hoped to be a bit quicker but any finish is a good one when the finish line is 100 miles from the start. I enjoyed the night section which couldn't be said for last year. The sunrise and stars were particularly spectacular

It means I have two tickets for the Western States draw and also have 15 UTMB points (or whatever the minimum is) for 2017. And most importantly the Grandslam dream is still alive.

Thanks again to the wonderful volunteers and I particularly thank the wonderful people who give up their Saturday night though to Sunday morning to help people like me to get through 100 miles. And sorry again for the mud at Wallingford...