How to finish the Centurion 100 Grandslam

Last year I finished the Centurion Grandslam of 100 mile races in 95hrs 46 to finish 11th out of 55 starters and 24 finishers. Here are my 3 key steps to finishing this amazing challenge

That is it. If you follow this 3 step plan, you will join the exclusive club of 68 Centurion 100 mile Grandslammers with the t-shirt and massive buckle that goes with it. I am one of 31 people who have done it in under 4 days. It is comfortably the hardest challenge I have ever done and something I am very proud of having finished.

I thought I would share my year covering both the races and what happened between. I have all the race reports elsewhere on this blog if you want the finer details of the races.

My training is constrained by a job in London with a bit of a commute plus a wife and two young children that I like to spend time with. This means that the traditional training plan with a long run (or even two) at the weekends was not an option. In the 6 month run up to the Thames Path, the longest runs I did was 17 snowy miles through Chamonix in February and a 3:38 marathon in December the year before. I keep all my training on the excellent www.fetcheveryone.com as well as Strava and every run was recorded. I have shown the graphs if you don't believe me.

I'm not suggesting this approach to anyone aspiring to be a grand-slammer but it may serve as a lower bound for what is possible. I have been blessed with a naturally slim body (I have the tiniest wrists of any man I know despite being over 6 foot tall) and a cast iron stomach (see the post on things I have eaten) which definitely help.

A key part to my training was double days. On my way to work, I would get off at Clapham Junction  and run the last 7 miles in to work and then combine with a lunch time run of 5 miles. Probably not a good as a 12 mile run but better than more time reading the Metro and BBC Sport at my desk. I managed to cobble together some 50+ mile weeks with a typical mileage of about 30-40.

It was more by accident than design, but my morning run was generally done in a "fasted" state as I left the house having only a cup of coffee inside me. I think these slow runs at 9ish minute miles with a backpack with my work stuff were good training. This run of about an hour was then topped up with a faster lunch time run.

http://76thmile.blogspot.co.uk/2016/05/thames-path-100-2016-snow-meteors-and.html
All Grand-slams start in Richmond and mine was no different. I had done this race before in 2015 and despite having much better conditions in 2016, I had finished about 30 minutes slower. It was a strange feeling finishing this race. I was happy to have a 3rd sub-24 finish but disappointed that it was my slowest. I could probably have finished a bit quicker and gone sub 23 but it just didn't seem worth it as I was carrying a bit of an injury through the last third. The feeling of finishing was different. The previous two races were stand alone events but this was part of something bigger and definitely unfinished business.

There are only 6 weeks between the first two races. This was on my mind when I was getting the train back home from Oxford. I was in a lot better condition than after the 2015 TP100 (decomposing donkey with trench foot) but still not ideal.  I had a minor hamstring injury which I was recovering from but that didn't stop me from getting out and running. I had underperformed on the Thames and wanted to get back on it. I could run for about 2-3 miles before my leg tightened and I had to walk it home. In hindsight I should have rested but within two weeks I was running ok.
It took the best part of 5 weeks to get my legs back to feeling like they weren't full of cement.
Normally I taper for events but I had only got back to normal the week before. We had a family holiday in Spain over the second May Bank Holiday (watching Dan Park shaped dots while drinking beer) and I managed to do a 10 mile run with sub 8 minute miles the weekend before the SDW.

http://76thmile.blogspot.co.uk/2016/06/centurion-sdw100-cows-wasps-fog-and.html
This was a cracking race and my best of the year. It just went right all day. I held great form until I hit the fog on Bo-peep in the last 15 miles. I was even ahead of Ken F for quite a bit of the race and managed a legendary sprint finish ( https://www.youtube.com/watch?v=Bmiqina9ZRE )
On the train home, I ended up chatting to Frank, Mark and Ken F about the Grandslam. It was all starting to become real....

Apart from a few blisters, I felt pretty good. I even went into work the Monday after the race and nobody realised anything was untoward. I left it a full week before starting to run again. First run back was a gentle loop on the North Downs Way. I am fortunate to live near the Caterham - Botley Hill section of the NDW so you can't get better training that running on the course.
The extra couple of weeks made a huge difference. I was back to normal with 3 weeks to go rather than just the 1. I got a 49 mile week in just before the race and was ready to face the North Down Way.

http://76thmile.blogspot.co.uk/2016/08/north-downs-way-100-glowworms-dormice.html
This was a big race for me in its own right. When I started ultras, this was the most famous 100 mile race for me. It was also the only 100 mile race I knew of.  It also known as a breaker of grandslams - no more so than when Wendy Shaw was taken out of the hurricane Bertha affected race with hypothermia at mile 98 (she has 3 other 'slams so don't feel too sorry for her). I got round in 25:31 which I was very pleased with. I had a lift back to the station with 2015 Grandslammer Louise and she told me I basically had the GS buckle in the bag but I still have the Autumn 100 to go.
Finishing the NDW100 was a major ambition of mine and completed a "career" slam (I did the 2015 A100). I felt a lot of pressure had come off as this year would be a fantastic one either way.

The gap to the last race is 10 weeks. The first two of this was in Maryland, US with my in-laws. I did some running to get out of the house but it was all fairly gentle. I resumed normal running fairly quickly but didn't do anything fast or long. I was paranoid about getting injured - I would have been devastated to have been injured and miss out.
The last few weeks really dragged. Every run I was thinking about the Autumn 100. I had done it the year before and kept visualising the route. I just wanted to be on the start line.
I had been catching up on TalkUltra podcasts ( https://iancorless.org/podcast/ ) and there were a couple of Centurion related episodes. Firstly it was great to listen to Mark Perkins and how to run the SDW100 9 hours faster than me. The second was Ed Catmur talking about his running. Ed was helping out at the Knockholt for the NDW100. They talked about Centurion running and the Grandslam came up. Ed mentioned it was something he wanted to do but it had eluded him. I have raced against him and barely even finished on the same day as him but I would have a change to beat him to the big buckle...

http://76thmile.blogspot.co.uk/2016/10/centurion-autumn-100-orions-belt-belt.html
I was finally here. James Elson has a tradition of asking people to put their hands up at the start if it is their first 100 miler, they have 5 or more finishes and who is going for the grandslam. There was a massive round of applause for the potential grandslammers but we were only part of the way there.
Every race for me is a case of ticking off miles but this race more so than normal. I had each leg as being a mini version of each race. The first leg on the Thames was the TP100 . The second and third  on the Ridgeway were the undulating Downs Double leaving just the last leg of the Autumn 100. It was weird to think that baring disaster, I would be walking back into the hall as a Grandslammer.
I had a terrible last leg with pouring rain but it was great to see so many people who had been part of the journey. It was an 8 hour grind but I had no doubt I would be make it back to Goring. Even the last legs splits into 4 sections being a fractal version of the slam.
Leaving the last aid station was a great feeling with 4 miles to go. I had 5 hours to cover the distance and with Dan Park sweeping I would definitely get there. I was coming down the final stretch and a fisherman congratulated me on my race. It was the final mile...

Coming into the village hall was a brilliant feeling. It had been a lot of sacrifices with time away from home, training and pain. I had the obligatory hug from Nici, put on my new red shirt and I was part of the exclusive Grandslam club. Now everybody who finishes a Centurion event is special but this was something else. The previous three races didn't quite feel right at the finish but this was the real finish line. 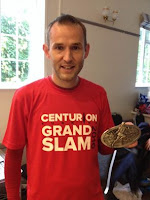 I am very proud to have joined the club of Grandslammers. We are a varied bunch including at least two cancer survivors, some in less than 3 days, some nearer 5 but they all count. Mine isn't the fastest or most inspiring but I got there.

Thanks for reading to the end - it is almost as much an achievement as doing the slam itself. However it wouldn't be possible without James Elson creating the challenge and the volunteers making it a reality.

I might be biased but I think it is up there with the best challenges in the world for an "average" runner. I don't think there is a better challenge in the World that you can just sign up to. Sure there are the Hardrocks, Sparathlons, UTMBs and WSERs but you need to be elite or have the lottery gods on your side (I'm 0/3 so far).